Dr. Jon Spelke has been practicing Veterinary Medicine in the Mid-Coast Maine area since 2000 and joined the Androscoggin Animal Hospital staff in 2002. In 2006, he became a partner in the practice with Dr. Chadima, and has owned the practice since 2015. He received his B.A. from Amherst College in 1992 and his D.V.M. from the Virginia Maryland Veterinary School (Virginia Tech) in 1999. Following graduation from Virginia Tech, he did an internal medicine and surgery internship at the Angell Animal Medical Center in Boston, Massachusetts.

Dr. Spelke has a special interest in internal medicine and is particularly interested in diagnostic ultrasound. He has practiced ultrasound extensively and performs them for the practice weekly. He lives in Topsham with his wife Amy, his son Max, his daughter Cora, his three cats and his two dogs. 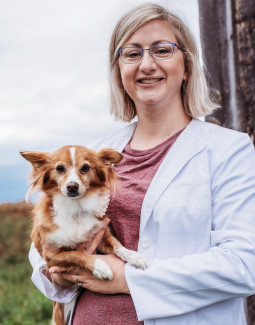 Dr. Katie McGee grew up on a farm that raised beef cattle and sheep in Gardiner, Maine. She attended middle school and high school in the Damariscotta area. She was able to show animals in 4H throughout her childhood.

After completing her BS in biological science (animal physiology) at Cornell University, Dr. McGee attended Atlantic Veterinary College at the University of Prince Edward Island and received her DVM in 2014. She has a particular interest in dentistry, dermatology, feline medicine, internal medicine, and small mammal exotics.

For the first 5 years of practice, Dr. McGee worked at a 24-hour emergency and general practice in Salt Lake City, UT, where she gained a wealth of experience. Dr. McGee and her husband, Tyler, moved to Ann Arbor, Michigan in 2018. There, they had their daughter, Willow, in January 2019. In Michigan, Dr. McGee worked at another 24-hour practice and did emergency, general practice, soft tissue surgery, and dentistry.

In 2021, Dr. McGee’s family decided to make a big move to be closer to family in Maine. Their four pets came with them: Charlotte (a long-haired Chihuahua), Lincoln (a mini lop rabbit), Simon (a ragdoll mix cat), and Forrest (a white Persian cat). She was looking for general practice with excellent quality medicine and a positive team of co-workers. She is so happy to have found that in Androscoggin Animal Hospital. 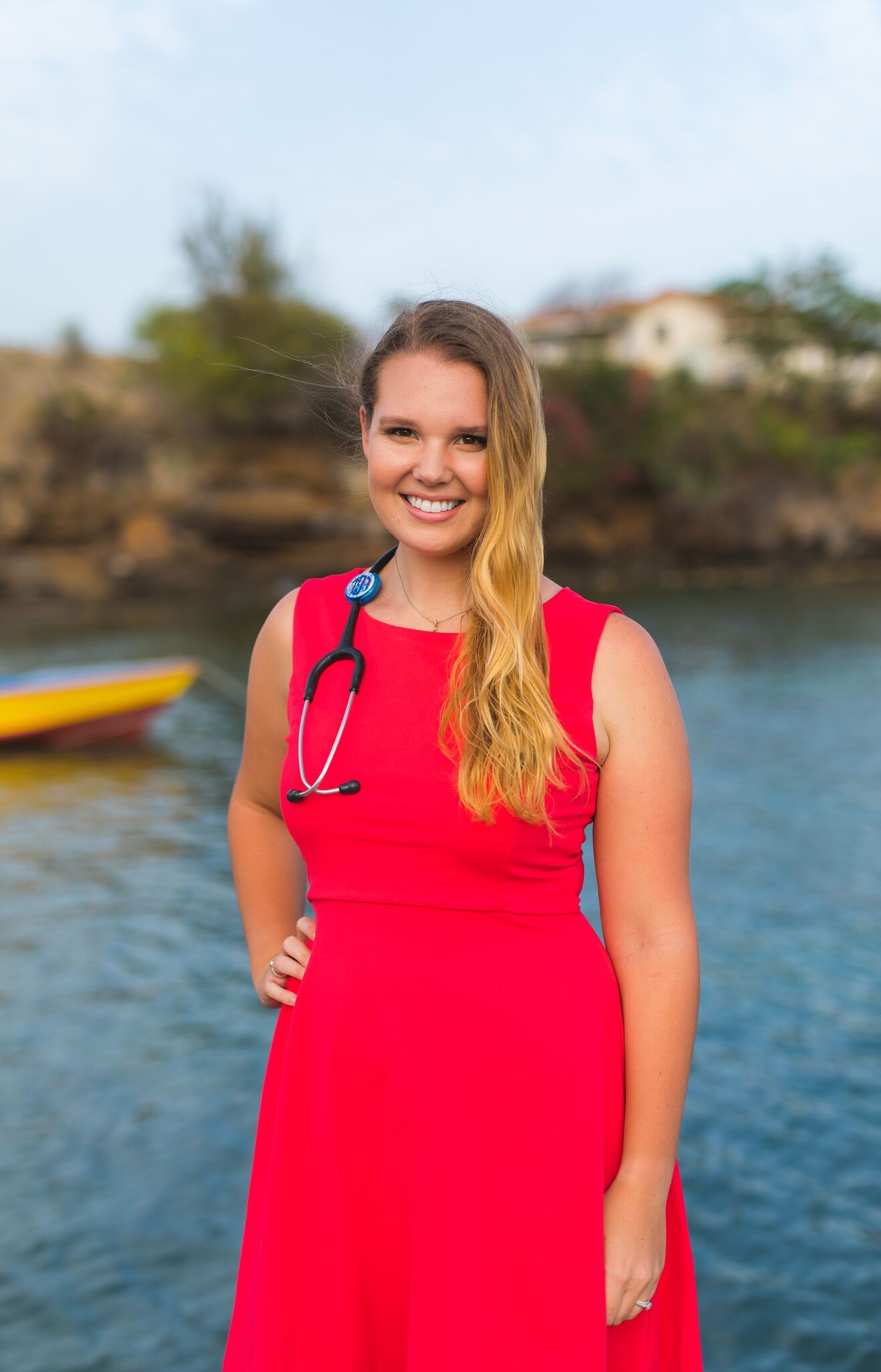 Dr. Lauren Skillin grew up in Topsham (2008 Graduate of Mt. Ararat HS) and is happy to return to her home town to work in the community. She joined Androscoggin Animal Hospital in November 2021.

Dr. Skillin obtained her BS in Marine Biology from Maine Maritime Academy in 2012, and went on to attend St. George's University in Grenada, West Indies. She travelled to Prince Edward Island to attend Atlantic Veterinary College for her clinical year, and graduated with her DVM in 2018. Prior to joining AAH, she has spent 3 years practicing small animal medicine in the Midcoast area. Dr. Skillin is interested in many areas of veterinary medicine, but is particularly interested in diagnostic imaging, pathology and as a professional hobby, loves to dabble in aquatic medicine and aquaculture.

When not practicing veterinary medicine, Dr. Skillin enjoys all water-related activities, including swimming, kayaking, SCUBA, and occasionally acting as sternman for her lobstering husband. Her family consists of her husband, daughter, and their goofy German Shepherd, Rez. 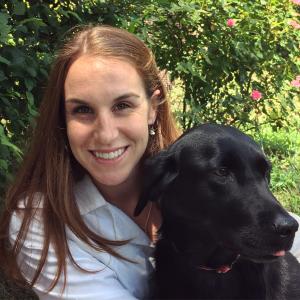 Dr. Molly Seaward is delighted to return to her home state and to join Androscoggin Animal Hospital in June 2020.

She grew up in York, Maine, and attended Bowdoin College, graduating in 2009. She then went on to Oregon State University to earn her doctorate in veterinary medicine in 2015. After completing a 1-year rotating internship at the BluePearl Hospitals in New York City, she developed her small animal internal medicine, surgery, and emergency medicine skills. She stayed in New York for another 4 years working as a general practitioner in the historic West Village of Manhattan. She enjoys all aspects of veterinary medicine but has a particular interest in surgery, sports medicine, and feline medicine.

She shares her home with her husband, sons, Labrador Retriever, and two cats named after important rivers: Alsea and Cathance.

Dr. Tyler Cote has been practicing veterinary medicine in Southern Maine since 2009. He received his B.S. in Biology & Animal Science at University of Maine Orono in 2005 and his Doctorate of Veterinary Medicine at the University of Tennessee in 2009. Tyler joined our team in 2013.

Dr. Cote has a special interest in Dermatology.

Tyler enjoys time at home with his son Tobin and his daughter Aelin. When he’s not home, he’s often found in the woods of Maine fishing and camping. 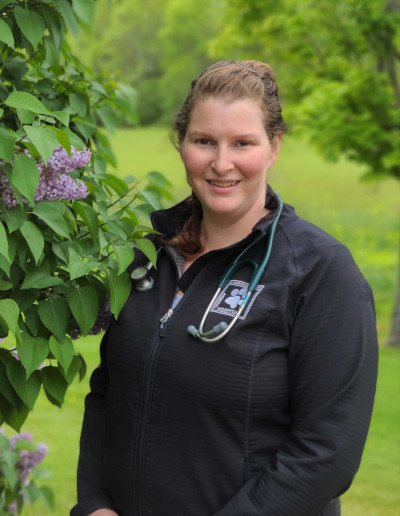 Dr. Niles Carlson has been working as a veterinarian in the Mid-Coast area since 2012. She grew up in Massachusetts but spent a lot of her summers exploring the lakes region of Maine with her family. After graduating in 2005 from St. Lawrence University with a BS in Biology, she started her veterinary journey as an anesthesia technician at Angell Animal Medical Center in Boston, while applying to vet schools. She graduated from the Atlantic Veterinary College on Prince Edward Island in 2011 and then moved to New Jersey to complete a one year small animal rotating internship at Red Bank Veterinary Hospital before moving to Maine in 2012. She has worked at general practices and emergency clinics over the last 10 years, both full time and as a relief veterinarian in the Mid Coast region before starting here at Androscoggin Animal Hospital. She has a special interest in surgery, dentistry and ultrasound.

She met her husband, Christian, after moving to Maine and they currently live with their daughter Lyra, their two cats (Elsa and Lina) and dog (Gowan). During the summer they enjoy exploring Casco Bay and its islands on their sailboat and are excited to share that adventure with Lyra this year. 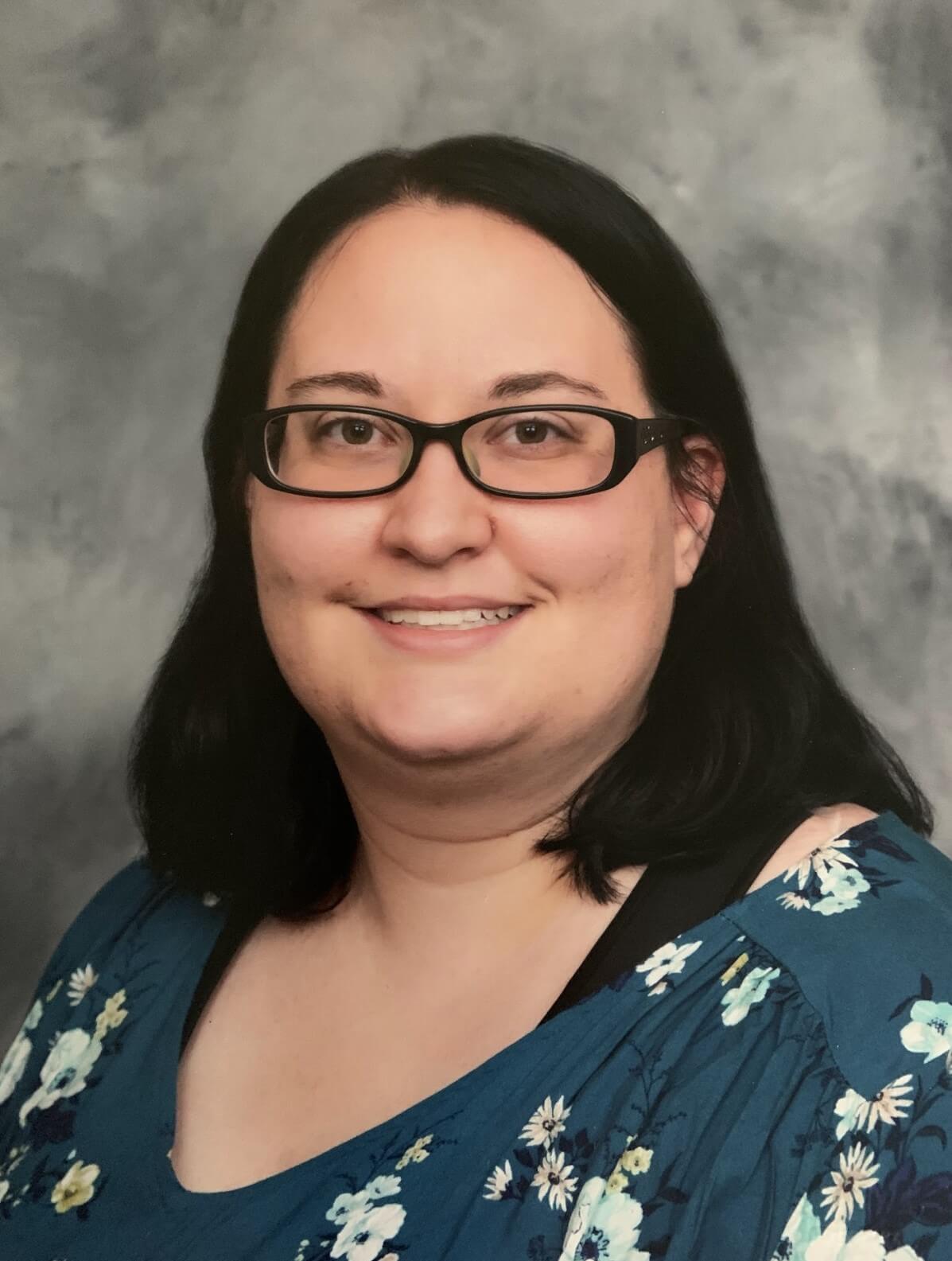 Dr. Madison Harrison grew up in Coolidge, Arizona. Running away from the dry heat, she was drawn to Maine by the wonderful climate and is very excited to be at Androscoggin Animal Hospital.

After completing her BS in veterinary science at the University of Arizona in 2018, she went on to attend veterinary school at Louisiana State University. While working towards her doctorate, she enrolled in a dual degree program with the LSU-Health Science Center to complete her Master of Public Health. She graduated with both her DVM and MPH in 2022 from LSU and the LSU-HSC, respectively.

Dr. Harrison has interest in both medicine and surgery with particular interest in zoonotic disease, exotic small mammals, and the human-animal bond. Outside of work, she is an avid reader, writer, and gamer. She lives with her two cats, Zora and Kiwi. 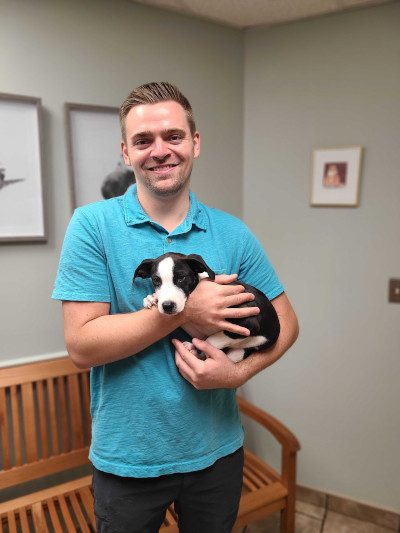 Dr. Rogers was born and raised in Iowa, graduating from Iowa State University College of Veterinary Medicine in 2020. Following graduation, he and his family moved to Washington state. He spent 2 years as a general practitioner with an emphasis on preventative medicine and spay/neuter surgery. After the birth of his third son, the Rogers family decided it was time for a change of scenery (and a bigger house). In his free time, Dr. Rogers enjoys many activities, including cooking and baking, as well as outdoor activities like running, hiking, biking, and playing on playgrounds with his kids.